The training of the dolphins takes place on a voluntary basis. The basis for this is the principle of positive conditioning, with a very intimate and trusting relationship between keeper and animal.

How does this positive conditioning work?

Learning through reward and a remarkably close relationship of trust between keeper and animal are the be-all and end-all. Similar to dog training, the dolphin receives a reward for each properly performed exercise, either in the form of a petting unit or a small fish bite. The reward is amplified by a whistle from the keeper's whistle, which signals to the animal that the exercise is over. Only the animals that correctly did their tasks are rewarded. Incorrect behaviour is ignored. In principle, there is no punishment for a mis-executed exercise or other misconduct, as this would have a lasting negative effect on the relationship of trust between the keeper and the animal. When a dolphin does not show the requested behaviour, another behaviour is then requested, which it masters well in any case. Thus, every training session comes to a positive end for the animal.

During this positive training, the dolphin quickly learns for which exercises it receives a reward and for which it does not. In this way, the dolphin learns individual exercises and eventually a whole program can be built up. The dolphins act in a similar form during medical training. For example, on a sign from the keeper the dolphins would lie on the side in order to have an ultrasound examination carried out on a voluntary basis, without having to fix the animal in any form or otherwise impair it. At the end of each successful exercise, there is the reward, which is an incentive for the animals to participate. Some animals learn very quickly, others need more time. Usually it only takes a few weeks for a dolphin to learn a new exercise.

The daily dolphin demonstrations in the Dolphinarium serve on the one hand to bring the dolphins closer to the visitors and to convey interesting facts about the biology and ecology of the dolphins, and on the other hand to keep the animals healthy and fit.
Unlike in the open air, the dolphins do not have to hunt their prey themselves in the dolphinarium.
Instead, the dolphins at the zoo feed on fast food - fish bites, which are offered to the animals by the responsible keepers in precisely dosed portions throughout the day.

While in the nature the search for food takes a lot of time and put demands on the animals mentally and physically, this is much less the case in the dolphinarium. As with all other zoo animals, the dolphins in the dolphinarium have more leisure time and less movement than their fellows in the sea. In order to compensate for this and to guarantee the physical and mental fitness of the animals, it is necessary to keep the dolphins busy. Regular fitness exercises and a balanced fitness training are used for this purpose – similar to us humans. This is done with the daily demonstrations and other training sessions, such as the so-called medical training.

It is important that all these dolphin demonstrations take place on a voluntary
basis. The basis for this is the principle of positive conditioning, with a very intimate and trusting relationship between keeper and animal.

Nevertheless, of course, every dolphin receives its full ration of fish every day, even if it does not participate in the exercises. 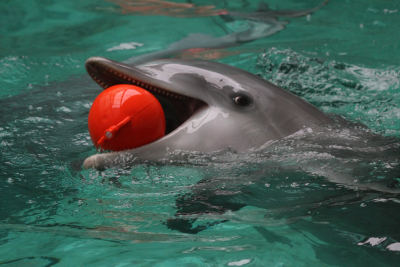